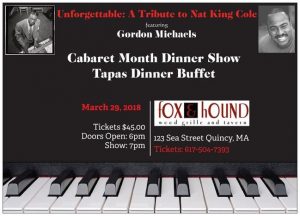 An Unforgettable Evening featuring the music of Nat King Cole. Boston cabaret artist Gordon Michaels’ powerful baritone voice, effortless delivery, and diverse stylistic range is perfectly suited to the classics recorded by Nat King Cole: `Unforgettable`, `Route 66`, `Autumn Leaves`, `Don’t Get Around Much Anymore`, `When I Fall In Love`, and more! Don’t miss this dynamic performer who has graced the stage with Patti Labelle, Jennifer Holiday, James Taylor, Rod Stewart, Cissy Houston, Keith Lockhart, and Tramaine Hawkins. This is Mr. Michaels first written show and the longest running show over 15 years now. This show is the extremely popular and booked the most. 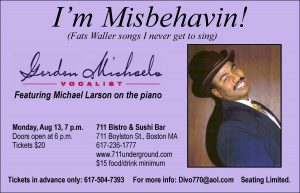 “I’m Misbehavin – Fats Waller Song I Never Get To Sing”

After having been in nine productions of “Ain’t Misbehavin’ “, Mr. Michaels feels it is now his turn to sing the songs he never got to sing that made this a classic great musical, including those usually sung by the women. As he sings with his powerful, dramatic baritone voice as only he can, Mr. Michaels blends the stories from his tours with stories of his life. Which will surely be a Misbehavin time. 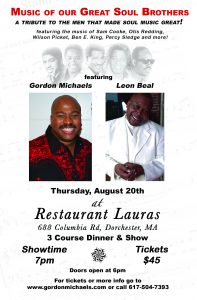 “Music of Our Great Soul Brothers”

A Tribute to the men that made soul music what it is today featuring music from artists: Otis Redding, Sam Cooke, Ben E. King, Sam & Dave, Wilson Pickett, Ray Charles and many more. Performed as only they could be by Gordon Michaels & Leon Beal  Boston’s own soul bothers. A walk down memory lane that no one should miss. 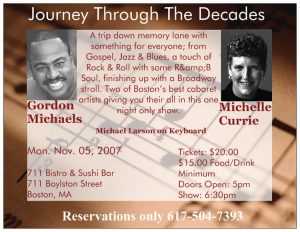 “Journey Through The Decades”

A trip down back in time with something for everyone; from Gospel, Jazz & Blues, a touch of Rock & Roll with some R&B Soul, finishing up with a Broadway stroll. Starring Gordon Michaels & Michelle Currie two of Boston’s best cabaret artists giving you their all in a one night only show. (Sometimes Featuring Guest Artists) 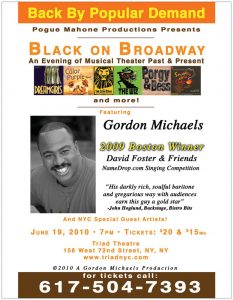 This musical revue features show stopping numbers from most of the well known traditional and new Black Musicals from Broadway and Off Broadway, including selections from Dreamgirls, Five Guys Named Moe, Ain’t Misbehavin’, Smokey Joe’s Cafe, Porgy & Bess, The Wiz, The Lion King, The Color Purple and others. If you love these shows and the music from them come have a good time. If you don’t know them then come and learn about them and have some great fun. 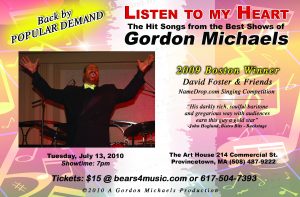 “Listen To My Heart”

Gordon Michaels pours out his heart and soul in a evening of special selected song that range from spirituals, gospel, old R&B and pop tunes with broadway and jazz sprinkled in as only this powerful Baritone can deliver. This show will lift your spirits and pull on your heartstrings. It’s not to be missed, make sure to bring a hankerchief . 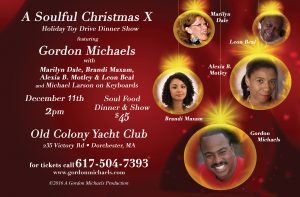 Is a holiday concert I put on every year as a charity event to kick off the holiday season. We sing our hearts out with some of our favorite holiday songs and some of the traditional Christmas songs but all sung with a new spin and a little chilli power to spice up your holiday season. We always have songs for all genres and something for everyone. This show is always done as a Toy Drive.